I saw this at Trader Joe’s tonight.

A closer look shows this: 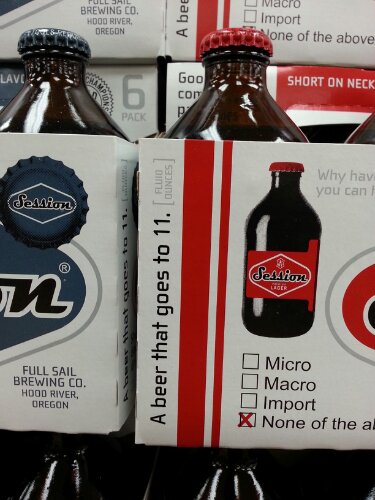 We got the lager. It wasn’t bad. More hoppy than Terumi likes, but whatcha gonna do?

My hopscotch goes to 11

…And they did too!

I am truly a genius! Like two years before these Johnny-come-latelies at the San Jose Mercury-News, I had this idea, now another “Who should be in the Hall” tournament. They’re so impressed that they’re doing brackets. Ooooh, and fancy them they might actually follow through and finish it. Big whoop (although in my defense, they aren’t presenting the case for each act, or making sample playlists, or even doing videos — all that took a lot of time). Posers. They didn’t even include the Tap.

But they have some interesting matchups and some acts I didn’t include. And you can go crazy and vote for the whole first round at once. So check it out.

They stole my tournament (sorta).

Just went to a page I found through facebook. I’d say they stole my idea, but I can’t say I created the tournament idea, and there’s only about a dozen people who have seen or participated in mine, so I’ll let it slide.
Ultimate Classic Rock Bowl

They’re probably following through, unlike me who kinda gave up about 2/3 of the way through. But, in case you want to see the battle of Luther Vandross v. the Beastie Boys…

And how did G&R beat Led Zep?